What an exciting weekend!! (To see ALL the photos from the weekend, click HERE) Gracie's best friend Jessie Juergensen and her mother Stephanie joined us on the trip. Even though Jessie is not yet a member of US Pony Club, she is a fellow horse nut and a very supportive friend. She and her mother volunteered with the games rally all weekend in addition to being a huge help to me! I am so grateful they came along!

The girls both did an awesome job and gained a ton of experience. After finding themselves in 4th place the team pulled together and before long long their 4-man team had advanced to third place. About halfway through the rally, after several exciting wins they had solidly settled into second place. I almost couldn't believe it because our team was very young with 3 out of the 4 being D-1 rated riders and first year games participants. Not to mention that 2 riders were only 7 years old! With a team like that you just hope they can remember all the rules, complete the games and stay on their horses!
Well not only did they accomplish all those things, as they entered the final of this 12 game competition, Gracie and Gemma's team was tied for first place!! The final game was called "Stepping Stone" where they have to jump off their horse, walk across the top of 6 paint cans without letting go of their horse, re-mount and race to the finish line. The race was really tight and all was going well but the girls were tired and fatigued. Re-mounting was getting harder and harder. Gracie was third-to-last to go. On her final re-mount she got one leg in the stirrup and just froze. She was so fatigued she couldn't lift herself up and just hung there straining. I was opposite her mounting side and could only see her head and arms pulling on the horse's mane and saddle. As my eyes were welling up with tears, her team started screaming wildly to encourage her and all-of-sudden, after what seemed like an eternity, Gracie emerged atop that horse and cantered across the line where she handed the race off to her 7th grade team captain. Elisabeth broke out into a canter with her big tall Thoroughbred, "Ariat" and led the team to a FIRST PLACE FINISH putting our young rookies into first place overall at the Midwest Regional Games Rally!!

But first place was not meant to be for our young riders. As we were all jumping around, screaming in celebration.......the judge took the megaphone and announced that our team had been disqualified from the race! What???? Why????? How?????

As it turns out, my little Gemma had stepped down off the cans and let one foot hit the ground. She knew if she fell off the cans she had to go back and start over, but she didn't know the same applied even if one foot touched the ground. Unfortunately no one else on the team knew this either so it went unnoticed, but not by the judge. The disqualification dropped the team to third place in the race and second place overall.

The games competition is only part of the total rally score. All the teams are also scored individually and as a team on "Horse Management". This includes a series of rigorous inspections that occur throughout the weekend of things like their horse's stall, horse grooming, tack and equipment cleanliness, tack room organization, safety checklists and even personal grooming and dress code. When all the horse management points were tallied, the team's second place finish slipped through their fingers by 4 one-hundredths of a point! Yes.....that's .04!!
It all happened so fast, the girls hardly understood what had happened. As much as my competitive heart ached for them, when it was all said and done, nothing could have taken away from all the fun and excitement of the weekend. The girls are better athletes, better competitors, better horse managers and best of all......better friends! I couldn't be more proud of them. 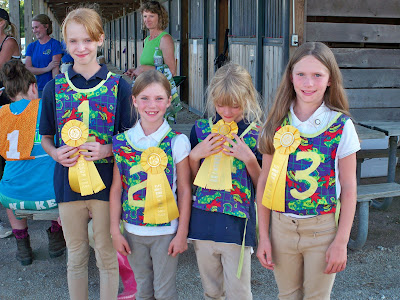 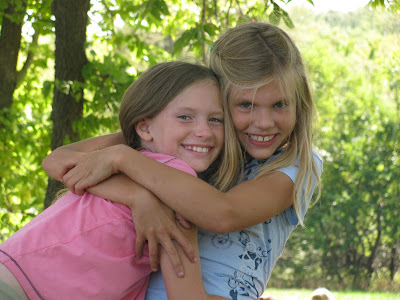