Wanted to let you know we had a great appointment at UNMC yesterday. X-rays revealed there has been no movement in Gracie's pelvis in the last week which is really great news.  This means we can finally put the threat of surgery to rest!  The doctor was really encouraged that Gracie had not used any pain medication except ibuprofen in the past week and said her pelvis is very stable and healing well.  He even offered to let her try using crutches at home soon and estimated that, at this rate, she may be able to try putting some weight on her left leg as soon as 6 weeks from now!!  This is a BIG change from the earlier plan of 12 weeks in a wheelchair!

Gracie is spending more time each day up in her wheelchair and was able to take the car ride sitting upright in the front seat yesterday!  Her pain has been minimal and today she started "virtual school" by viewing her classes using Facetime on her iPad!!  We hope to get her physically back to school within the next week or so.

The doctor continues to encourage us saying Gracie's pelvis will heal completely and there is no reason to think she couldn't be back on her horse by Spring.  Her goal is to show Magic at Cornhusker Pony Club's annual and traditional April fundraiser, The Shaggy Horse Dressage Show!  I am already tearful with ideas for how we will celebrate her return to riding!

Thanks again for all your support and prayers! We are so grateful for the outpouring of well wishes from family, friends and The United States Pony Clubs from all over the country!!!
No comments:

This is a ship Marshall(5) created today.  It was quite a project that began when I caught him trying to saw through a pencil with a steak knife. He said he needed something to be the exact same length as the eraser so I traded him the pencil for some crayons. I was stunned by the symmetry he achieved on the wings using my large Cutco scissors.  He wouldn't tell me where he got the Christmas lights! LOL 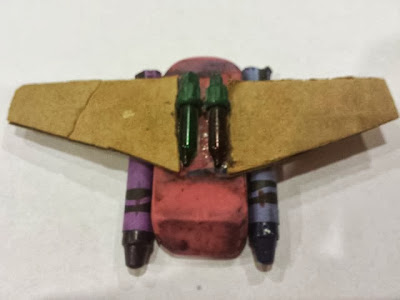 Marshall had a great 1st day of school!  Special thanks to Grandma Seevers for going with him while Scott and I were at UNMC with Gracie. 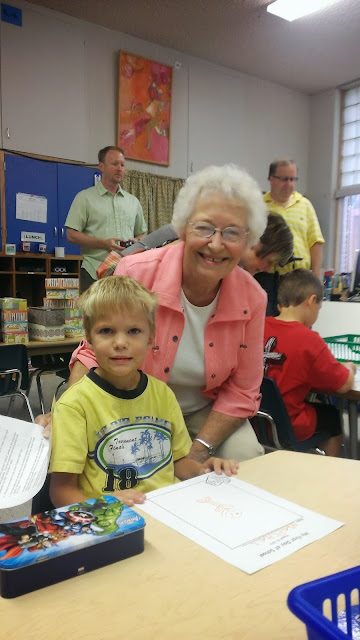 Gracie is still in the hospital in Kansas City. She broke her pelvis in what we now know to be 4 places. 3 of the fractures are lateral and anterior compression fractures. The 4th, and most troublesome is a zone 2 sacral fracture that goes through the neural foramen. That's troublesome because some very important nerves are in that space.

Often times they do surgery on this type of injury to avoid devastating nerve damage, but they feel that Gracie's SI joint ligaments are strong enough to hold the pelvis in place while she heals. Unfortunately there can be absolutely no weight bearing on her left side so she will be in a wheelchair for 3-4 months.  The best news is that Gracie's growth plates reveal she has more growing to do and they expect her to heal well and have a full recovery.

Gracie explained to me that she had just remounted during the game and had kicked him on before she had her feet in the stirrups and her reins gathered up. So with a ball in one hand, no stirrups and a long rein, she just wasn't positioned to handle the buck. We think he bucked her 2 or 3 times before she went off and finally landed just wrong on her right side. Interestingly, the troublesome break is on her left side.

Magic is not new to the games. This behavior was completely uncharacteristic of this horse as we have NEVER seen him buck her before. The whole thing is a complete shock to us.  Gracie thinks he just got really excited, but I believe he was irritated and over-stimulated from the noise, the new environment, being stalled, etc.. (Here is a link to a YouTube video of Pony Club games. Keep in mind this is an international competition. Things don't move quite as fast at our level, but it gives you a great sense of what was going on: https://www.youtube.com/watch?v=YPc5KVHRfeI)


Gracie's first comments after receiving the news that she'd be in a wheelchair for so long:
"Who is going to ride my horse? He'll get so FAT if he's not ridden!"
"Now I won't be able to rate up this fall!"

But then after things settled in a bit she said, "You know, with all that time on my hands, I could rate up several levels in Horse Management (the knowledge portion of a Pony Club rating)!!"  She is a Pony Clubber through to her very core.

I have had several "non-horse" friends and family members ask me questions like "Will you "let" her ride again?" and "Will you "let" your other children continue in horses after this?".  And many others who aren't asking, I know, are thinking it or asking it behind my back.  These are the same questions I received after our horrible trailering accident 3 years ago.  They are fair questions and that is why at times like this I am so grateful for the outpouring of love and support from our Pony Club family.  Their understanding of my situation means the world to me and helps sustain us. They understand why I cannot, and will not, pull all my kids off horses.

Gracie posted a video on my Facebook wall just yesterday and said I could share it with anyone who asks the question, "Will Gracie ride again?".  I wanted you to see it because it reveals what is in her heart.  http://www.youtube.com/watch?v=FVI4fyXo9cY

Thanks again to all of you and please continue to pray for Gracie over these next few months.  Feel free to friend me on Facebook if you're interested in following our updates.

Praising God and knowing He will use this for good,
Danna Seevers
Joint District Comissioner, Cornhusker Pony Club

If you know me well, you're aware of my tendency to become verbose under severe stress. So to save my mind and you the long phone calls, I'm going to try and document things here as we go.

On Friday, August 9th at about 9am, during the Games competition, Gracie took a terrible fall.  She had just re-mounted Magic after picking up a ball during a race. The race was close and Gracie kicked him on before having her feet completely in the stirrups and her reins gathered up.  Before she could get full control of him, he began to buck. She believes these were bucks of exuberance due to the excitement and speed of the race. I believe Magic was nervous and over-faced by all the excitement, loud music and yelling fans inside this strange, new venue he had never experienced before. Regardless, he was bucking and he was bucking hard. Gracie was caught completely off guard and Megan Timmerman reported that the second buck threw her, what seemed like, 2 feet in the air. He threw the third buck UP as she was coming DOWN and this time she went flying hard to the ground.

I was on the side of the arena shooting pictures of the event and had just lost Gracie in my zoom. When I found her in my lens, I could see her losing her seat but by the time I dropped the camera away from my face, she had landed like a ton of bricks just 20 feet in front of me. She raised up her head and shoulders but almost immediately laid back down. It was that instant I knew she was badly hurt because Gracie would never over-dramatize an injury or let her horse be loose in the arena.  I sprinted to her fearing she had hit her head but when I got to her, she assured me her head was fine. She was complaining about her low back and was obviously in excruciating pain.  Beads of sweat were forming on her upper lip as she tried to describe the location of her pain. The paramedic on duty had rolled her on her back, but this only made the pain worse. When I raised her knees she expressed relief, so thinking she must have broken her tail bone, I reached my arms under her knees and raised her butt off the ground.  I stood like that for what seemed like an eternity, trying to ease her pain while we waited for the ambulance to arrive.

Initial x-rays showed "no fractures" and they attributed her pain to severe muscle spasms in her back. She was given Roxicet and Valium and told they would get her up to walk in a couple hours. I called everyone to report the good news and settled in for the typical, lengthy emergency room experience.  However, when the nurse got Gracie up to use the bathroom, she couldn't put weight on her left leg and became pasty white, dizzy and nauseous.  They immediately laid her back down and the MD returned for additional examination. Considering what happened, the MD felt it was best to get an orthopedic evaluation and some further blood work to rule out internal bleeding.

By the time the orthopedic resident-on-call arrived, it was now 4pm.  As part of his exam, he asked her to stand but as soon as she sat up in bed she became nauseous and pale again.  He felt the pain meds were probably getting the best of her and decided to come back and do his evaluation later. On his way out he visited with ER MD and she expressed concern and pointed out that Gracie hadn't had any pain meds since 10am that morning, making it unlikely they were the cause of her symptoms.  It was at this point they decided to order a CAT scan of Gracie's mid section to get a better look at the soft tissue and bones.

By this time, Scott was on his way to Kansas City with Marshall and Nyla. Last he heard Gracie had no fractures and would just need to rest in the hotel for a day or so.  We thought he could watch Gemma and Luke ride Saturday morning then take the kids to Lego Land while I sat with Gracie at the hotel.  I had to call him with the frightening news that the CAT Scan had revealed several fractures in her pelvis and they were starting morphine through her IV and preparing to admit her.