Every fall we try to fatten up the horses a bit to better withstand the harsh Nebraska winters.  This year was no exception, in fact it was probably the worst winter these horses have ever seen.  But come spring, it's time to cut back on their grain and start trimming  them back to their ideal body condition.

Since I've been on maternity leave from my horse chores I haven't spent much time with the horses over the past several weeks.  On Tuesday of this week I was out at the farm and noticed that one of the horses still seemed way too heavy compared to the others so I became concerned. At first I thought she must be stealing grain from the others, after all, she is the "boss mare".  Then I wondered if she was eating too much hay and getting "pasture belly" but since none of the others seemed bloated I started to wonder.  I wondered.....could it be?? So I approached the horse and reached under her belly and found two very bagged up teats full of milk!!  Unbeknownst to anyone, this horse was about to have a baby!

They say when a horse "bags up" she is very close to delivering but I didn't know just HOW close! This morning as I was helping the farrier trim another horse's hooves, I looked over and noticed a large sac hanging out of the back of Jules!  Without a single sound from the mother, this little stud colt had just entered the world!

So we counted back 11 months and recalled one evening when all the horses got out, causing the stallion to jump his fence.  No one saw anything....but it had to be the day right?   The kids want to call him "Wonder" but Aunt Karen will have the final say in that matter! 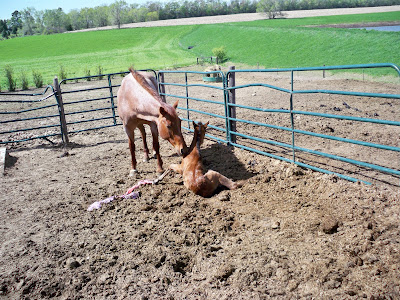 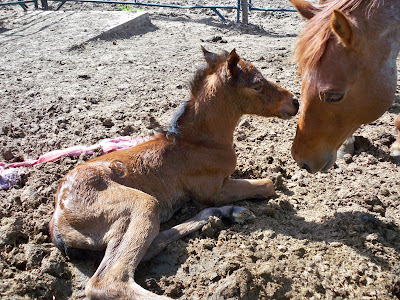 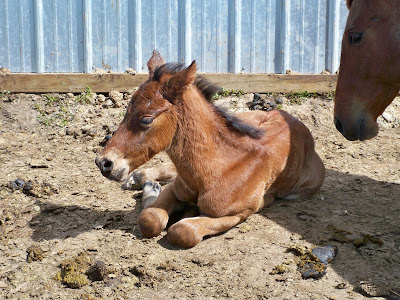 So fresh he hasn't even stood yet!